It's Going To Be OK

Earlier this week, someone posted this meme on Facebook. 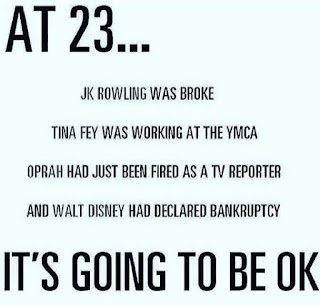 I had seen it before but, for some reason, this time it struck me as particularly distasteful.
Wait, what? Distasteful? Isn't it just a harmless and possibly even inspiring meme that conveys something like "don't freak out if you haven't achieved your full potential by age 23. Relax." Sure.

But there's still something that makes me uncomfortable about this meme and what it implies under the surface. What I write below is subjective, personal and certain to make me seem like a bitter creep at first, but hear me out. It has a happy ending.

One could easily pick 4 people who were doing just fine at age 23 who then seriously ran into trouble later in life. It would be just as easy to create a meme that concludes "it's NOT going to be OK".

Beyond poor logic, there are other things that strike me about the meme.
For instance, what does "It's going to be OK" really mean? At its most benign, I suppose it just means "life will work itself out" or "you will eventually achieve your dream". Again, there is no guarantee for this, statistically or historically speaking. But I don't want to come off like a pessimist or a party pooper who is trying to squelch people's hope for happiness. Quite the opposite.

And that's why the choice of those 4 people in the meme bothers me. Essentially, they are 4 rich and famous people in the entertainment industry. And the obvious implication is that for them "everything is OK" because of their wealth and fame. Sure, they achieved their dreams, but what makes it alluring to us is the fact that they make lots of money and are adored by lots of people.

But, hypothetically, what if any or all of those 4 people are secretly miserable? Or evil? Are they OK? (Since Walt Disney is no longer living, place this in the past tense for him.)

I bring this up because, if I had seen this meme when I was 23, it would have been  the exact thing I wanted to hear. At 16, I was convinced I was the next Steven Spielberg. There was no convincing me otherwise. But as the years rolled on, success didn't come to me like it did Spielberg.
At 23, he had already directed the pilot for "Night Gallery" and was on his way to becoming the director we know today. By contrast, when I was 23, I was still in college, shooting projects on VHS. Clearly, Spielberg was not the person I should have chosen as a chronometer of my success/failure.

(I have buried the lead. Let me get right to the point.)

It's good to have heroes. It's good to set goals. These things along with ambition can take us to great places.

But they can also lead us astray. Creative people like myself set career goals and life goals based on the promise of fame and fortune. My entire adult life has been spent pursuing a nebulous carrot on a stick that is "directing a Hollywood feature film", or something close to that effect. Which is fine. Nothing wrong with chasing the dream.

But it occurs to me at this late date that I have been so focused on that carrot (and clearly failing to get it) for over 25 years now. And that continual failure to grab that carrot has led to frustration, anxiety, depression and general feelings of worthlessness and failure.

Yet when I look back at that 25 year struggle, I can point to very tangible creative accomplishments on my part. I have written, directed, shot and edited too many projects for me to count. And I had a great time making all of them*. During their creation, I was in the zone, completely consumed and creatively fulfilled. I was happy. 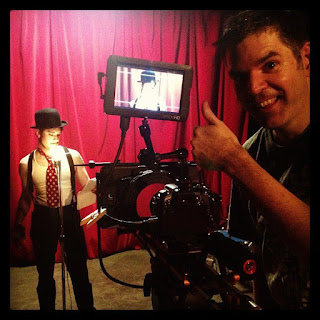 But I was not rich or famous. And I hadn't yet directed that Hollywood feature**.

A big source of my unhappiness was the attitude that all these projects I've worked on for 25 years were not "real". Or they were just distractions to my real goal of making feature films. I seriously have felt guilty making short films instead of trying to get a feature off the ground. I have said no to numerous projects because I wanted to reserve my time for writing a feature.
Worst of all, there have been so, so many times when I had a notion to do something else creative other than filmmaking--write a song, paint, write a short story, act in a play--only to reject pursuing it because I felt I should be developing that feature.

This decades-long denial of my creative impulses, predicated on the idea that they are distractions from my true calling, has led me to abandon a lot of potential creative work, satisfaction and happiness.

And part of the reason for this denial is because I have bought into the idea that I'm only a success if I'm rich and famous. Or at least heading towards that eventual destination.

Looking back, however, I find that I was most happy, most creatively fulfilled on projects that were done for the sheer joy of filmmaking, or on no-budget films made by people passionate about expressing a personal vision. In other words, projects where I made little or no money.

On the other hand, projects that had budgets or that were "more legit" usually came with the caveat of being ephemeral bullshit designed to sell people things they don't need, or were spoiled by too many cooks because it wasn't about art but rather about business.

When I was a kid, I drew pictures and comic books. I recorded audio skits, wrote songs, wrote short stories, you name it. And I didn't care whether it was an "appropriate career move" or not. I just did it. Looking back, those were good times.

So what determines success in life? Wait, let's not even frame it in terms of success or failure. What can "it's going to be OK" mean?

For me, the answer is a selfish one. I'm going to quit saying "no" to my creative impulses. I'm going to quit pursuing a dream that was not wrong, just imprecise. My dream wasn't too big. Turns out, it was too small. Feature filmmaking is not the dream. CREATIVE ACTIVITY IS THE DREAM. In whatever form it wants to take shape. If a feature comes along, great. But there are so many other things I want to do. And it's time I start doing them. 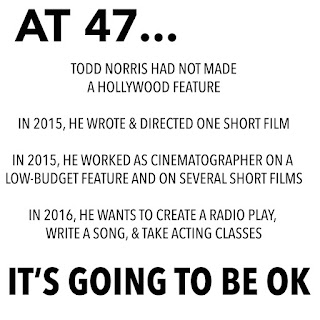 * There were a small number of projects that were very stressful and no fun. Sometimes getting your vision on the screen involves blood, sweat and tears.

**I did write and direct a feature film in 1998. Ultra low-budget, but I can say I scratched that itch once in my life.